The microwave switch make use of PIN diode to achieve the impedance characteristics of ON or OFF under the forward and reverse bias voltages, and realizes the control of microwave signal conversion.

Under given working conditions, the maximum input power that a microwave switch can withstand. It is related to PIN diode power capacity, circuit type (in series or in parallel), working state (continuous wave or pulse) and heat dissipation conditions. Generally speaking, there are two power damage mechanisms for PIN switches, one is voltage breakdown (common in pulsed power), and the other is thermal burn (common in continuous wave).

The direct leakage of modulated video pulses on the main RF line. When the modulation speed of the video pulses is high and the carrier frequency is low, the radio frequency energy of the leaked video may be aliased with the modulated carrier and cannot be filtered by a high-pass filter, resulting in bit errors. , So the smaller the video leak, the better.

PIN diodes are also non-linear, so harmonics are generated. In broadband applications, PIN switches may fall in the frequency band and cause interference. ZTS Technologies Co., Ltd. can provide you with high-quality low-harmonic PIN switches.

The reflective switch acts as isolation by reflecting the input microwave signal back when the PIN diode is turned on. Therefore, VSWR in the "on" state is better, but VSWR in the "off" state is poor; The absorption switch uses the load to absorb the reflected signal when the PIN diode is turned on, which improved VSWR, so VSWR in the "on" and "off" states is better. Generally, the withstand power of a reflective switch is larger than that of an absorptive switch. From the perspective of engineering applications, although its price is slightly higher, we recommend using an absorptive switch, because it can reduce the inter-stage traction of the system in the off state.

The connector is mainly SMA series, or removable. The removable switch is a microstrip pin interface after removing the connector seat, which can be easily assembled with the circuit, but at this time, please pay attention to the signal crosstalk in the space to avoid reducing the isolation of the system. 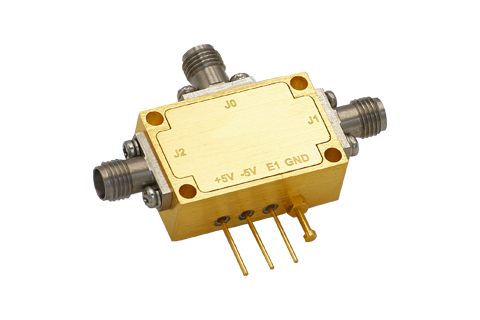 Please submit your message online, we will contact you as soon as possible!